This year, Windermere Kirkland was among the winning businesses! To help our community better understand the Kirkland awards luncheon we decided to interview Samantha St. John, Executive Director of the Kirkland Chamber.

For those that might not be familiar, what are the Kirkland Chamber Awards?

There are a number of awards given each year and we select winners who have helped better the community and chamber in some way. This year was our 84th annual awards ceremony, and our chamber is 100 years old.

How does the nomination process work?

We send out nominations for a month and members of the chamber can nominate local businesses, organizations, or individuals. Along with the nomination, they must also submit the reasoning for why they feel their nominee deserves the award.

How are the winners picked?

Each award has significance and we make sure that each winner is deserving of the award. For that reason there is a selection committee for each award. It is comprised of the Chamber staff, board president, and the previous five winners of each award.

What is your favorite memory of being involved with the awards?

My favorite part of being involved with these awards is actually making the phone calls to the winners. I love catching them off-guard with good news. All of them are so humble and always ask if I called the right person, or if they really deserve it. And that is how you know someone truly deserves it – when they give freely of themselves without the expectation of anything in return. And we love giving them the unexpected recognition for their efforts.

Can you tell me a little bit about each award and the significance each one has?

This is one of our newer awards, named after Merrily Dicks, who has always been an advocate for the arts. Her passion fueled the culture and heritage in our community, including forming the Creative Arts League, which is now the Kirkland Arts Center, the Heritage Society, Summerfest, and the Kirkland Cultural Arts Commission. We thank you, Merilly, for helping keep our community beautiful and the arts thriving.

The winner of this award is dedicated to promoting and preserving the creative and cultural components of Kirkland through the arts. That is why we chose Windermere Kirkland for the winner of this year’s Merilly Dicks Community Arts and Culture Award. Their dedication to the community and chamber is admirable and their support of local artists through Artist’s Outside The Box, featuring different local artists throughout their office every two months, is preserving and promoting the local culture of our amazing city. Mike & BJ Connolly both embody the same creative drive that Merrily has brought to our community.

This award is in honor of our good friend and one of Kirkland’s patriarchs, Chuck Morgan, who we lost a few years ago. He was integral in the founding of the Kirkland Performance Center, Evergreen Hospital, and Cascadia Community College. Chuck was a journalist and long-time publisher of the first newspaper on the Eastside, the Eastside Journal.

A few of the criteria to win this award includes being involved in giving back to the community, proven leadership, and accomplishments in your industry.

A. Duane Lund Chamber Member of the Year Award

This award is named in memory of A. Duane Lund, who was a well respected local attorney who even served as the Washington State Trial Lawyers Association. Duane was passionate about being involved in the chamber as well as the community. Serving as the Board President in 1993, he continued giving back to his community despite getting older.

This award is named in memory of Anne J. Owen who was an active member of the community and dedicated herself to giving back to Kirkland. She was an integral part of the preservation and maintenance of the Kirkland Arts Center while she served on the board for 10 years. Anne truly went above and beyond for her community, and we will always be grateful for that,

This award is given to someone who, like Anne, devotes themselves to the community over an extended period of time.

William C. Woods “ Above and Beyond” Award

This award is in honor of Bill Woods, who has truly gone above and beyond for the Kirkland community. He served as the Chamber president two times, as well as serving on the Kirkland City Council, and of course, serving as Mayor from 1966-1974. His years of unwavering support for our community is admirable and we appreciate all that he has done.

The recipient of this award must exemplify similar dedication and commitment to the community.

This award is in memory of community leader, Lee Johnson. He believed that the key to success was giving back to the community. Which he did through the chamber, his family business, or just personally. He also understood the importance of teaching his kids the value of giving back. For this reason, this award highlights a young adult in our community who has similar values from a young age.

The winner of this award is a student who exemplifies dedication to the community as well as involvement in extracurriculars.

The winner of this award must be an active member of the chamber that helps elevate the chamber to new levels.

Outstanding Ambassador of the Year Award

Another new award is the Outstanding Ambassador of the Year Award, which recognizes someone from our incredible team of Chamber Ambassadors, who are an extension of the staff here at the Chamber. The winner of this award goes above and beyond their call of duty to better the chamber.

Then we have the Kirkland Downtown Association Awards!

First, is the Teddy Overleese “Teddy” Award named in honor of the founding Executive Director of Kirkland Downtown on the Lake, which we know today as The Kirkland Downtown Association. The winner of this award is completely dedicated to the community.

And lastly, we have the Dick Beazell Friend of Kirkland Leadership Award, which is dedicated to Dick Beazell who was involved for several years with the Chamber as well as The Kirkland Downtown Association. 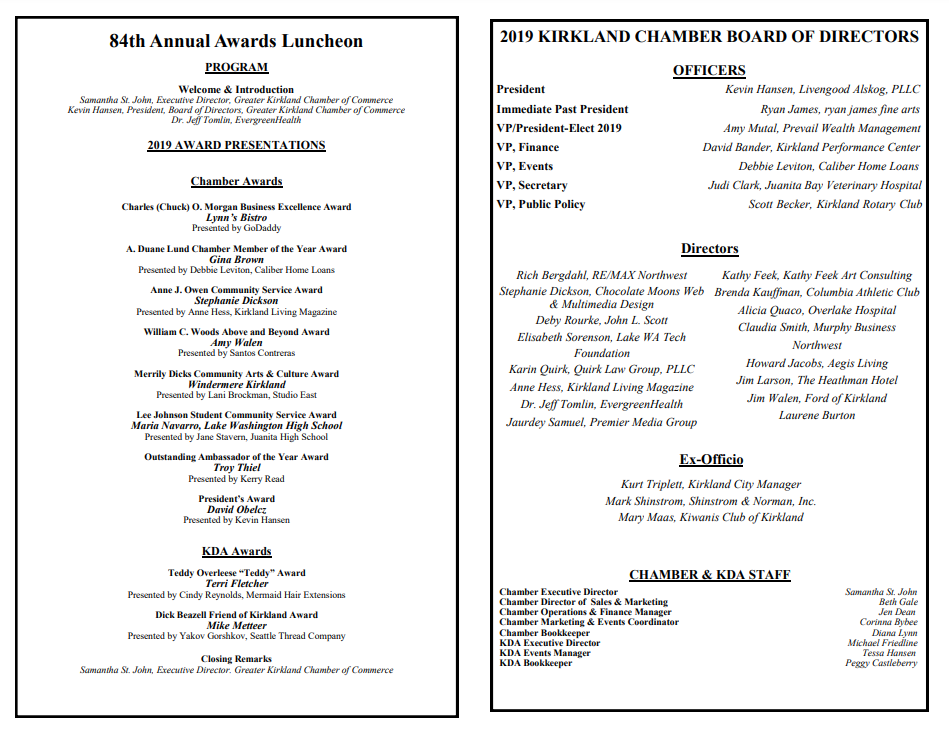 How long have you been involved with the Chamber?

I have been involved for seven years, it will be eight years in January! I previously served as Director of Marketing and Communications and I am currently the Executive Director for the Chamber.

What sets the Kirkland Chamber apart?

We like to say we are the “fun” chamber. We have anywhere from 1-4 events per week, where we encourage members of the community to get to know one another and grow their networks. There is no shortage of activities to get involved!

How does someone get involved with the Chamber?

We encourage everyone interested to come check out an event. You can also find more information here online on how to get involved and the costs associated with joining.

Our philosophy is: “People do business with people they know, like and trust” so come get to know us here at the Kirkland Chamber!

To learn more about the Kirkland Chamber and to get involved visit their website https://kirklandchamber.org/ or call them at (425) 822 - 7066

Meet the brokers who traveled South East Asia for a year: Ansel & Josie